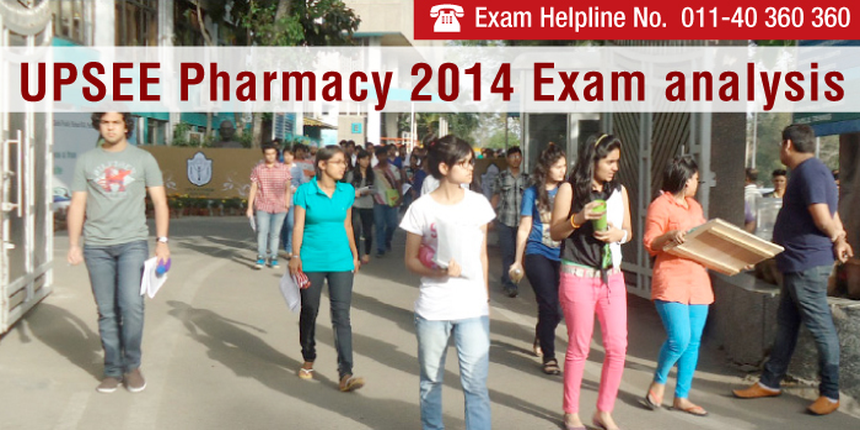 Prof D. S. Yadav, Pro Vice Chancellor, Uttar Pradesh Technical University said that 13,000 students appeared for the UPSEE Pharmacy 2014 entrance exam. “The exam was conducted smoothly and no glitch was reported form any of the centres so far,” he said.

UPSEE Pharmacy 2014 entrance exam comprised of 3 papers Physics, Chemistry and Mathematics/ Biology. Each paper of UPSEE Pharmacy 2014 consisted of 50 objective types multiple choice questions with four options to the each question. Total duration for the paper was 3 hours and each question carried 4 marks with the maximum total marks being 600. According to the UPSEE notification, there were no negative marks for the exam.

The candidates who appeared for UPSEE Pharmacy 2014 exam said that physics was the toughest part among the three sections but the overall difficulty level of the paper was moderate.

Anurag Kumar who appeared for UPSEE Pharmacy 2014 exam from Srinagar, Uttar Pradesh centre said, “Physics was toughest among the three sections of the UPSEE Pharamcy 2014 entrance exam. Overall, the difficulty level of paper can be rated 7 out of 10. For me Biology was easy.”

Sharing his exam experience, Shailendra Thakur, who took the UPSEE Pharmacy 2014 entrance exam from Agra centre, said, “Difficulty level for Biology paper was easy. In Chemistry sections, almost equal number of questions appeared from Organic as well as inorganic sections. Physics was tough for me.”

According to the exam conducting body, the result of UPSEE Pharmacy Entrance Exam 2014 along with UPSEE Pharmacy 2014 answer key will be declared on May 20, 2014.

The opening and closing rank during 2013 counseling for these colleges is listed below:

Stay tuned to pharmacy.careers360.com for more news and feature related to UPSEE Pharmacy 2014.

can you provide me of b pharma colleges in India...

List of all B. Pharmacy colleges india as per 2017 rankings below.

List of exam for all colleges and rnakings velow.

Are you asking the registration Licence of Pharmacy? If yes then I would suggest you to go through with the given below link for the address.

In case you have any other query then let me know.

Here are the colleges given below for B.Pharma programme:

To know the further you can go through with the given below link.

Which are the entrance exam for admission for d pharma

Hi Karishma. The following are a few major entrace examinations for admission for D Pharma:

Except for  these examinations, some institutes have their own criteria to give admissions in place, and offer admission on the basis of the score of applicant in such qualifying examination.

Which are D pharma government college in up?

View All Questions
Have a question related to B.Pharma ?

Your UPSEE brochure has been successfully mailed to your registered email id .